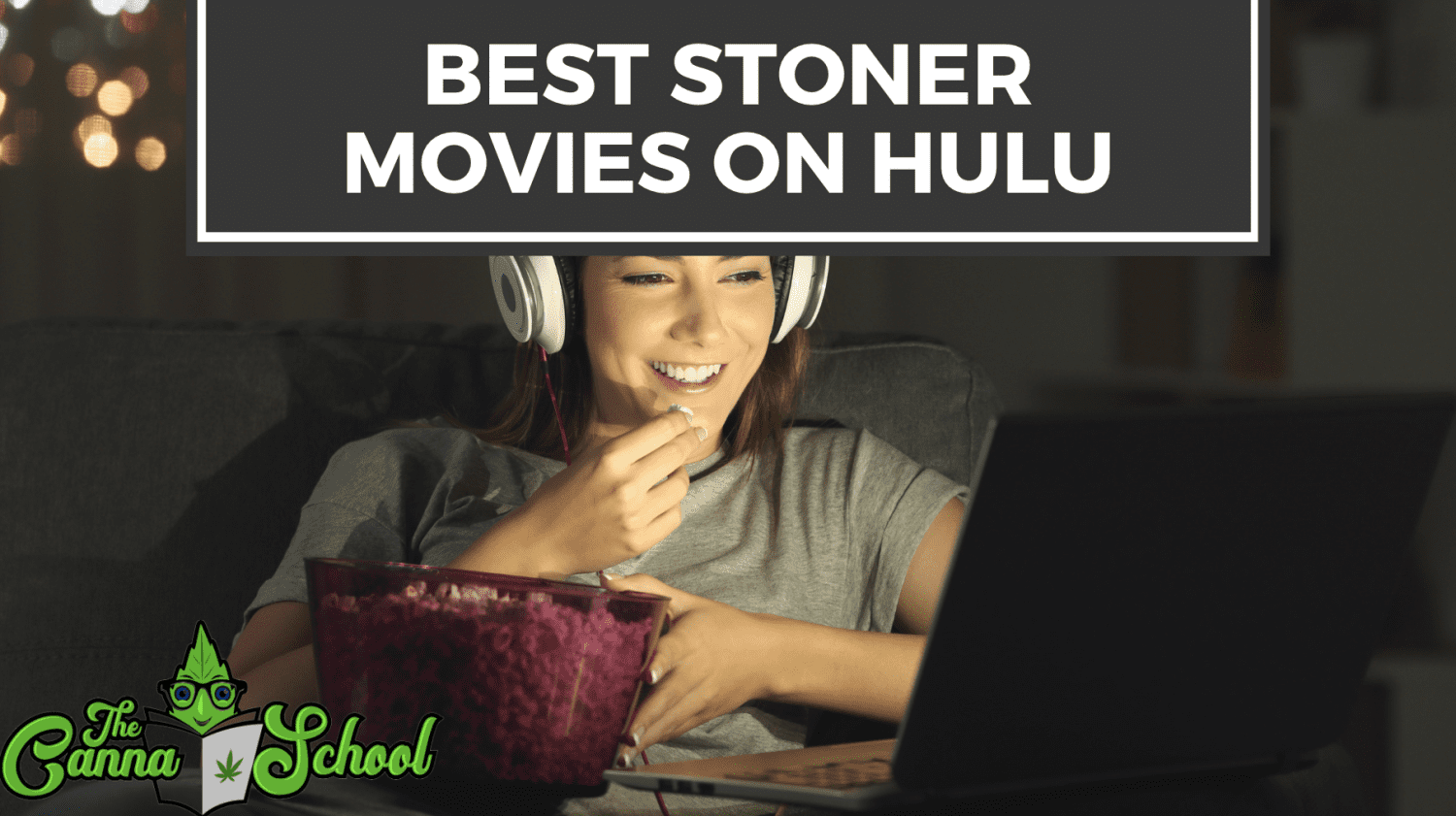 A comprehensive list of 27 of the best stoner movies on Hulu. When it comes to getting high, the most popular past time is watching a funny stoner movie, especially a stoner movie on Hulu because you can watch them back to back with this streaming service. The best part is you can have a huge movie night with your friends and family and watch a bunch of stoner flicks that you couldn’t find anywhere else!

Grab your popcorn and your drinks because we’re about to dive into 27 of the best stoner movies on Hulu!

Up in Smoke is a staple in the stoner movie category! The movie follows two stoners; Cheech Marin and Tommy Chong, who unknowingly smuggle a van crafted of only weed across the border! The chief of police is on their trail the entire movie! Cannabis recommended but not required.

Half Baked is a story that revolves around three not so bright men, Dave Chappelle, Guillermo Diaz, and Neal Brennan. Throughout the movie, the stoner group attempts to come up with a variety of crazy schemes to infiltrate the jail and save their friend. Cannabis recommended but not required.

Mac & Devin go to High School is a stoner comedy based around two highschool students. The over-achieving nerd and the highschool failure who is in his 15th year of school. The movie features music stars Snoop Dogg and Wiz Khalifa. Cannabis required.

Super High Me is a documentary/ comedy that stars stand up comedian and cannabis advocate Doug Benson. He documents 30 days of non-stop cannabis use and 30 days living cannabis free to compare the effects of both! Cannabis not required.

The Beach Bum is a weed comedy that follows the life of the rebellious stoner named Moondog. Moondog lives on his own rules which are shown throughout this 1-hour 35-minute comedy! Featuring Matthew McConaughey, Snoop Dogg, and Isla Fisher. Cannabis recommended.

Kid Cannabis is a mix between a biography, comedy, and crime movie that shows the real-life story of then an eighteen-year-old high school dropout. He learns how to traffick cannabis across the border of Canada in order to make serious money which changes his life forever. Starring Jonathan Daniel Brown, Kenny Wormald, and Aaron Yoo. Cannabis not required.

The Night Before stars comedian and actors Seth Rogan, Joseph Gordon-Levitt, and Jillian Bell. On the night of Christmas eve, these three lifelong friends spend the night in New York City on a quest to find the world’s best Christmas parties. Cannabis not required but recommended.

Grandma’s Boy is a comedy that follows a thirty-five-year-old who is a game tester. During the movie, he needs to move in with his grandma and her to old lady roommates. This comedy stars Allen Covert, Linda Cardellini, and Shirley Jones. Cannabis not required.

The Stoned Age is a comedy that stars Joe (Michael Kopelow) and Hubbs (Bradford Tatum) who are a team of rockers who are on a mission to find “chicks”. The movie is a tale of their adventures during one hilarious night. Cannabis not required but recommended.

Puff, Puff, Pass is a stoner comedy (the title probably gives it away). The main characters are two stoners who voluntarily get mixed up in a hilarious plot to rip off a sketchy person known as Mr. Big. Starring Ronnie Warner, Danny Masterson, and Mekhi Phifer. Cannabis recommended.

Jay and Silent Bob Strike Back is a stoner comedy that revolves around the comic “Bluntman and Chronic”. The stars of the comic are real-life pot heads named Jay and Silent Bob. The comic gets a big-screen deal and they get none of the money, so they set out to destroy the movie. Starring Jason Mewes, Kevin Smith, and Ben Affleck. Cannabis recommended.

American Ultra follows a stoner who is actually a government agent. During the movie, he is marked as a liability to the government and is targeted to be exterminated. The power of cannabis propels him to be too hard to handle. Starring Jesse Eisenberg, Kristen Stewart, and Connie Britton. Cannabis recommended.

This animated comedy is a classic! Beavis and Butt-Head Do America follows the dim-witted duo who travel across the country in search of their stolen T.V. Starring Mike Judge, Bruce Willis, and Demi Moore. Cannabis not required but recommended.

The Culture High is a news documentary that dives into the deep-seated roots of a morally induced cannabis campaign. It reveals the interesting path it has taken to get it to the awareness it is known for today. Starring Bo Dietl, Joe Rogan, and Snoop Dogg. Cannabis not required.

Strange Wilderness is an adventure comedy that is based around a wilderness television show that ratings have dropped off. Two animal fanatics go into the Andes Mountains in search of the legendary Bigfoot. Starring Steve Zahn, Allen Covert, and Justin Long. Cannabis not required but recommended.

Rolling Kansas is a comedy and independent film that is about a road trip to find a magical forest of cannabis. Five men set out on a journey to find a secret government cannabis operation in Kansas. Starring James Roday, Sam Huntington, and Jay Paulson. Cannabis not required but recommended.

Now we have entered the part of the list that cannabis is definitely recommended. These goofy comedy stoner movies are hilarious, especially when you add a little cannabis to the equation.

Spaceballs is a sci-fi comedy that follows a rogue star pilot and his sidekick. They need to rescue a princess and save their galaxy from an evil race of creatures known as Spaceballs. Starring Mel Brooks, John Candy, Rick Moranis. Cannabis recommended.

Kick Ass is an action-packed comedy that stars Dave Lizewski who is just an average unpopular high school student and comic fanatic. One day he decides to become a superhero even though he has no powers, training, or reason to do it. Starring Aaron Taylor-Johnson, Nicolas Cage, Chloe Grace Moretz. Cannabis recommended but not required.

Super is a movie based on an average joe who finds his wife under the influence of a bad drug dealer. Deciding to take matters into his own hands he becomes a superhero called the ‘crimson bolt’. His only problem is he lacks the actual heroic skills. Starring Rainn Wilson, Ellen Page, and Liv Tyler. Cannabis recommended but not required.

Step Brothers is a comedy that follows the life of stay at home adults. These two jobless middle-aged losers still live in their parent’s homes. Then the movie takes a turn when they are forced against their will to live together when their parents become married. Starring Will Ferrell, John C. Reilly, and Mary Steenburgen. One of our favourite stoner movies on Hulu! Cannabis recommended but not required.

Talladega Nights: The Ballad of Ricky Bobby is a sports comedy that follows the number one ranked NASCAR driver Ricky Bobby (Will Ferrell). A new French rival appears that was previously a Formula One driver who puts Ricky’s driving skills to the test. Starring Will Ferrell, John C. Reilly, Sacha Baron Cohen. Cannabis not required but recommended.

This hilarious comedy follows the adventures of self-proclaimed stuntman Rod Kimble (Andy Samberg), who throughout the movie is preparing for the biggest jump of his life. His mission is to jump 15 buses in order to raise enough money to pay for a heart operation for his dying stepfather. Starring Andy Samberg, Isla Fisher, Ian McShane. Cannabis recommended but not required.

The Waterboy is a comedy sports movie based around a waterboy (Adam Sandler) for a college football team who discovers his unique hidden talent, he can tackle! Once the coach learns of his skills he gets a spot on the team! Starring Adam Sandler, Kathy Bates, Henry Winkler. Cannabis not required but recommended.

Billy Madison is a movie about the main character ‘ Billy Madison ‘ (Adam Sandler) who wants to inherit his father’s hotel empire. In order to do so, he needs to repeat grades 1-12 all over again due to his immaturity and laziness. Starring Adam Sandler, Darren McGavin, and Bridgette Wilson-Sampras. Cannabis not required.

The Art of Self-Defence is a comedy-drama that revolves around a young man (Jesse Eisenberg) who is attacked on the street. Not having the skills to defend himself he enlists at the loco dojo. A mysterious sensei guides him and teaches him how to defend himself. Starring Jesse Eisenberg, Alessandro Nivola, and Imogen Poots. Cannabis not required.

Jackass 3D is a stunt-filled, adrenaline-packed, painful comedy documentary that follows a group of friends run by Johnny Knoxville who performs insane stunts. Made in 3D so you can get the full effects! Starring Johnny Knoxville, Steve-O, Bam Margera. Cannabis not required.

Ryan is a content manager at thecannaschool.ca who has a background in economics. Ryan specializes in making cannabis edibles at home but loves to write about all things cannabis!