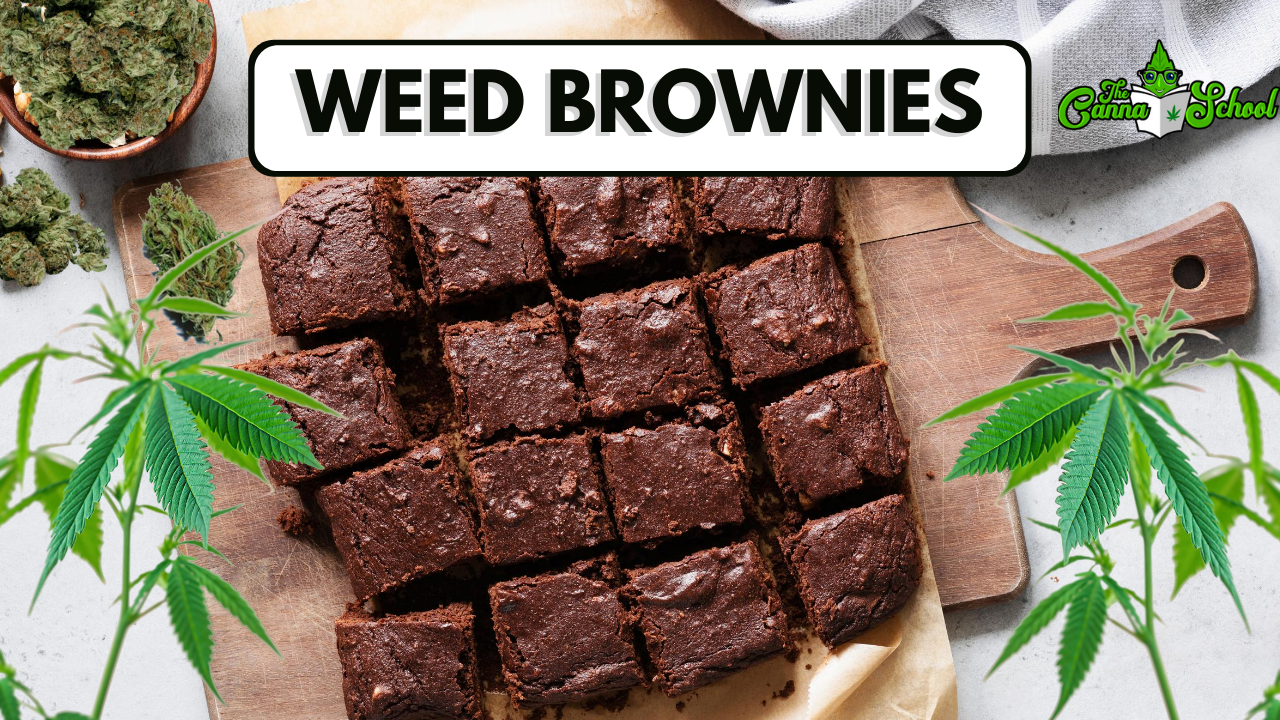 One of the most popular cannabis edibles out there is cannabis-infused brownies. This is because of the simplicity of the recipe and how quickly they can be made. This old-school recipe has built up quite a reputation. This pot brownie recipe is easy to make, only takes around an hour to complete, and is guaranteed to impress!

Most people have heard the horror story’s of grandma eating the wrong brownies. It’s important you make sure that you keep these out of grandmas reach, and it’s especially important to keep these away from children and pets! Any dessert edible recipe is going to be attractive to people who have a sweet tooth.

We have edible labels stickers to properly inform other people that this product contains cannabis.

Here’s What You’re Going to Need:

To make weed brownies you’re going to need some equipment first. Luckily, these are all household items so you will most likely already have all of this equipment. Here is a list of what you will need:

There is only one ingredient in this recipe that you probably won’t find in your pantry at home. That ingredient is cannabis butter. If you’re not sure how to make it or want to learn how we have a comprehensive guide to making cannabis butter here that will help you.

The recipe we have here also calls for 3 cups of white sugar. If you’d like, you can also infuse this recipe by using cannabis sugar. This ingredient is much harder to make than cannabis butter so if you are just a beginner, we recommend that you use cannabis butter. However, we have a guide here to making cannabis sugar. You can also make weed brownies with a few other ingredients which we will talk about further down in this post.

Infusion Machines Make Edibles For You! 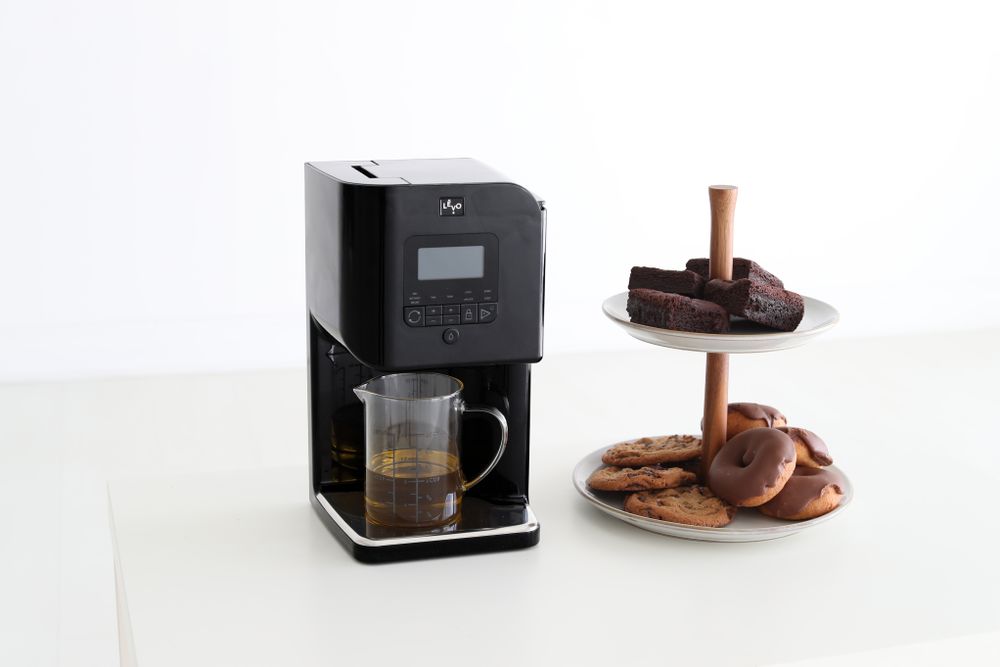 Decarboxylating and infusing your cannabis edibles can take a lot of time and effort. Luckily, there are great infusion devices to make this process as easy and seamless as possible. Cannabis-infusion machines are countertop devices that decarboxylate and infuse your butter, oils, and other ingredients for you. With just a few clicks you can have cannabis butter at your disposal! 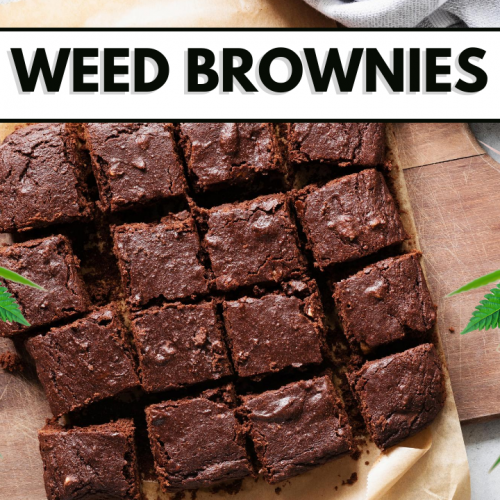 Another important thing to note about potency calculations:

Calculating the potency of your edibles accurately is not an easy task. There are many variables involved. Some of these include the amount of cannabis that was actually infused into the cannabis butter, what the exact percentage of THC the cannabis you used was, and even the amount of cannabinoids that are burned off when you cook the brownies. In short, there’s a lot of places that your estimate can go wrong, and if there is an error at the beginning of your calculation, that error will be carried throughout and your result will be way off. It’s important to understand that the potency calculator is just to help you estimate the potency.

Other Ways to Make Weed Brownies

Depending on the ingredients that a recipe calls for, you can make weed brownies with a wide variety of ingredients. Cannabis brownies are just regular brownies except there is an activated ingredient being used in place of a regular ingredient.

Can I Make Weed Brownies With Store Bought Brownie Mix?

As we mentioned earlier, you can make pot brownies with whatever recipe you’d like! You will just need to swap out a regular ingredient with a cannabis-infused ingredient. If you are going to use a store-bought mix, we recommend using this Ghirardelli Brownie Mix. Although it really does not matter which brownie mix you use, you just need to make sure you can add a cannabis ingredient to it.

When using a store-bought brownie mix, we recommend that you choose one with a strong flavour. What we mean by this is that if you were to use a vanilla brownie mix, it would not cover the taste of cannabis nearly as well as a dark chocolate mix.

If you use the mix that we recommend, you would substitute the 1/2 cup of vegetable oil with a half cup of cannabis-infused vegetable oil. We have a comprehensive guide here to making cannabis vegetable oil.

How to Dose Pot Brownies

When it comes to cannabis edibles, there is always uncertainty on how to properly dose. The best way to dose cannabis edibles is to start small. In the case that you don’t know the potency of your cannabis butter, it’s important to start by eating a very small amount and wait for the effects. Keep taking these small portions until you find the correct dosage for you. Everyone’s size and preference will be different so discover your personal amount needed!

Another important thing to note, make sure to wait for at least 4 hours before you decide that the brownies are not strong enough. In some cases, edibles can have a delayed onset. After you understand how much of a brownie you need, reference this point for future use. Then you will know exactly how much you need for the next time moving forward.

Depending on how potent your cannabis butter is, your brownies may taste like cannabis. This recipe does a pretty good job of masking the taste but it’s possible for the brownies to retain some of the cannabis flavours.

Brownies do a better job than most recipes when it comes to masking the flavour of cannabis. Weed gummy bears, for example, are not as good at covering the flavour because there are only a few ingredients being used.

There will be a strong smell of cannabis when you decarboxylate and infuse cannabis into an ingredient. The smell from this can last for a few hours or even up to a couple of days.

However, if you have already decarboxylated and infused your ingredient, the smell will not be nearly as bad. If you use fans and allow the kitchen to air out while you cook the brownies, it is possible for the kitchen to be smell free an hour after cooking.

Weed brownies, like other cannabis edibles, usually produce effects at around one hour after consumption. The main problem with consuming weed edibles for the first time is that everyone’s body is different. What we mean by this is that for some people edibles can have an effect after 30 minutes and for others, it can take up to four hours. Weed brownies will have an effect depending on each individual’s digestive system, if they have eaten other food recently, and many other factors. The point we’re trying to make is that there is not a defined time of when cannabis edibles will have an effect.

Since we know that in some cases it can take up to four hours for the brownies to have an effect, it’s important to eat them one at a time. Let’s suppose that someone eats a brownie, waits 45 minutes, and then decides that the edible did not work. Since this person believes the edible did not have an effect, they eat another one. However, the first brownie had a delayed onset and now this person has just consumed way more cannabis then they would have liked to. Most people experienced with cannabis will be able to tell you a personal story similar to the example we just gave. It’s important to wait the full four hours before you decide to have another brownie!

Why Didn’t My Weed Brownies Work?

While looking around on the internet at some other weed brownie recipes, we noticed that a few of the top ones will not even work. Here’s how the other recipes go:

The recipe that we noticed calls for combining cannabis and butter in a pan, and then adding this combination directly to the brownie mixture.

I should probably clarify what I mean when I say they won’t work. So, if you try one of these other recipes (which I will not mention by name) the brownies will probably look and taste great! However, the problem is that these brownies will not allow you to feel the psychoactive effects of cannabis. The problem with these recipes is that they do not take into consideration the most important part of making cannabis edibles, which is activating the THC. We have a great post here that goes into detail about the importance of decarboxylation.

So if this is your first time making cannabis edibles, there are a few important things you should know:

Although edibles can seem a little overwhelming at first, they’re much easier than you’d think. If this is your first time making edibles, make sure to comment and let us know how they went!

Jake Randall is a journalist, author, and student with expertise in all things cannabis (especially edibles), along with knowledge in economics, the environment, and everything in between. Originally from Canada, Jake has taken on the role of a senior cannabis correspondent at The Cannabis School.

25 thoughts on “How to Make Cannabis-Infused Brownies”